Live performances from Danzig, The Sword, The Decemberists, Cage, Brian Posehn, and morrrrre
Posted by ZOMIC at 11:45 AM No comments:

Here we have a poster for SoCal/AltRock/Post Hardcore legends FAR. Was super excited to do this one. They're coming out with a new record through Vagrant Records in Spring 2010. More to come:)

Here's are some pictures of the process... 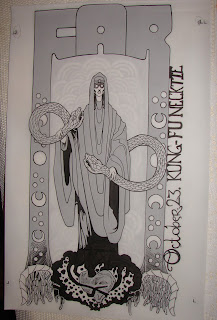 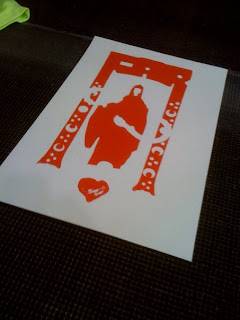 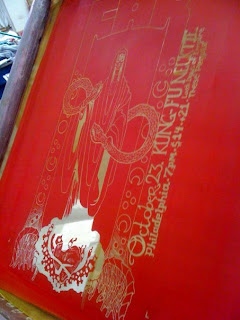 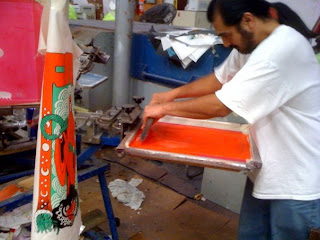 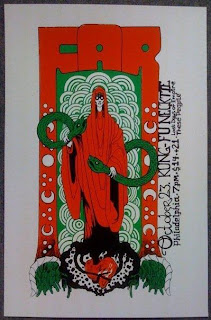 I was fortunate enough to do 2 posters for Halloween this year, for 2 bands on opposite sides of the country!

The first: Was for Greg Lowe and The Jargonauts/The Meyer Straights show at Hucklebucks in Pottsville, PA. 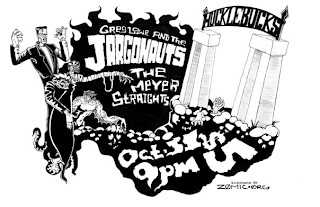 The second: Was done For Viva La Villians in Seattle, Wa at Julia's on Broadway. There's 2 pics here...First the poster.... 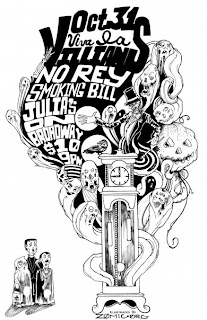 2nd the poster hanging up, space needle in background 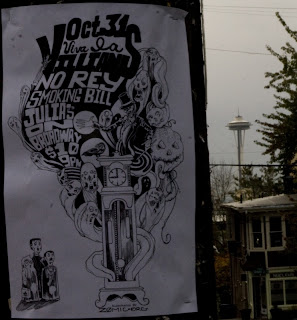 This 15x8 mini-esq poster is a 1 color(deep red) print on oatmeal french paper.
40 in the edition because the show got moved to a smaller venue and we had to adjust accordingly. Printed by abnrml. 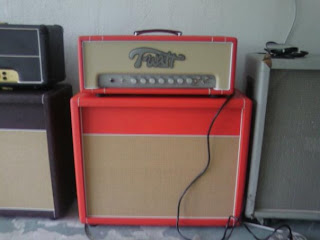 Ok so admittedly I've been slacking on posting on the blogosphere but thats what happens when fighting mutant lobsters! so HA!

Anywho...This here is a T-Watt amplifier. I was approached months ago by Jack Kay about designing a logo. Well here we have the precisely crafted final product.

There are also badass T-shirts for sale on the website so be sure to visit and snag one
Posted by ZOMIC at 8:34 PM No comments: 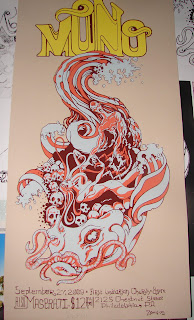 This poster was done for Mono and Maserati at the First Unitarian Church in Philadelphia. The art piece is titled "As we slip away". Its a 4-color silk screen 13x24 on 100lb French paper. Edition of 60. printed by Abnrml
Posted by ZOMIC at 10:25 PM No comments: 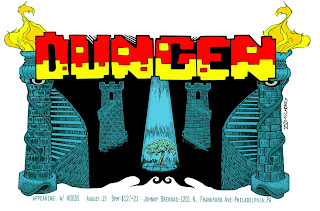 Go to this show and you'll feel like you swam in warm gravy!
Posted by ZOMIC at 3:38 PM No comments:

So I’ve been a fan of Cage(Chris
Palko) since the days before Movies for the Blind. I rem. Going to
see Cage, MHZ, High& Mighty, RJD2 and Sage Francis at Club
Krome(defunct) in South Amboy, NJ. Never did I think I’d be doing a
piece of artwork for him 7yrs later…

The conceptualization of this was tricky. Cage’s new album “Depart from me”
seems to be about his transformation away from the rough, gritty, griminess
we knew from Movies for the Blind. Cage has been quoted as saying it was "an
exorcism of sorts". Without anything other than single “I
never knew you” I knew I had to rely on not what I’d only heard
before but almost anticipate the direction the art was headed. I also
knew that I didn’t want to draw a direct comparison with the
previous work of Alex Pardee on Cage’s album.

After discussing the concept with
Jon(Abnrml T’s), we decided it’d probably be best to have the
illustration drawn straight on to the vellum they use to make the
screens. This was an apprehensive task but one I knew could pay off.

I was at Flatstock 20 in March and talked to Dave Witt about how he
approaches a poster for print, NO COMPUTER NEEDED. Yeah that’s
right this is the FIRST screen print I’ve done w/o ANY aid of a computer.
Both myself and Jon(printer-Abnrml T’s) were interested to see how things
would turn out.
Welp you decide...Here's some pictures of the process... Next step is to drive to W.Reading and drop the Vellums off to Jon Next Lets go to the show!